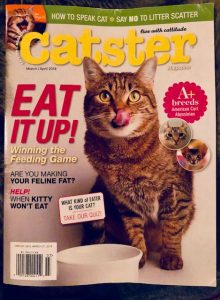 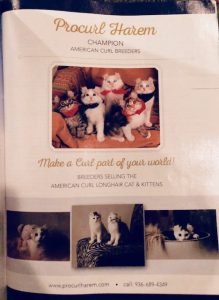 American Curl Press and Publicity JULY 2013 photo: © Katrina Delmar Katrina is filming a documentary on Caroline’s life including her life with Curls, hat design and her art. Release date will be announced.

Grace Coddington gets a touch up before talking about her Persians.

Chuck Scarborough Show Oct 2009. Publicity for the MEET THE BREEDS show 2009 at the Javits Center. There will be another show 2010. Check CFA.org for info.

Our American Curl “PERSBY” on the shoulder of Andy Samberg of Saturday Night Live fame.
“Persby” is a stunning blue tabby boy now owned by the Kilbins of South Riding VA.

August 2008 – My Cat MagazineWendy Ko of the Hong Kong Cattery YOCURL, has reason to be very proud of her accomplishments with the breed. “Snickers” here on the cover is from Procurl Harem and so is Hanna, the red tabby female here. Naturally we are very proud of them. – caroline

The crew and Caroline
The wonderful crew on the last day of filming in Nov 2011. True Entertainment was the production team that shot the “TOO CUTE” segment for Animal Planet that aired March 17 2012. The gang was at our loft for 6 visits over 12 weeks from the first day IKEA had her babies. Such fun. IKEA and her 4 babies, Fabrina, Knoppa, Ransky, and Jonas were all stars. Enjoy!

The Animal Planet CATS 101 “human interest” story being set up in our loft May 12 2009. The fun production crew was from Powderhouse Productions out of Boston. Lights, camera, Curl action with me and Madeleine Curlbright getting ready for the big day.

Shooting at Elegant Fabric House in NYC winding out the day, where Madeleine (k/a Jordan)  greeted unsuspecting shoppers at the door. Some were quite startled to see her sitting atop bolts of tweeds and faux fur. She was my inspiration for my Fall line, and made the day for everyone so happy by giving a perfect performance. No “take 2’s” with Jordan in the spotlight!–Caroline

OUR AMERICAN CURLS featured on CATS 101 AIRED SEPTEMBER 2009 – Animal Planet’s much anticipated program after last years success, has shot another—this time on 4 cat breeds, and a special human interest segment. (don’t know which other breeds)
After they shot our Premiership Curl 2 weeks ago for one of the segments involving playing together with other breeds on a studio set, Planet came to our home a week ago and shot hours of just our Curl kittens playing and being “on” the way Curls can do it. Amazingly enough, we had 3 litters, each 3 weeks apart, so it was really a great display of breed development and lots of silliness to say the least. Cameras were following the kittens around on the floor as they sped through their cat tunnels, leapt from cat trees, and assembled all in unison as if on cue on the window sill,  when they noticed a flock of gulls flying passed, with the Empire State building in the background. Really cool. It was a purrrrfect day light wise and the kittens were demanding the spotlight. I thought all was done for the Curls’ segment and I was very very pleased to have been part of both segments.  Well it wasn’t over…….
Planet called a few days later and wanted to add a “human interest story” to the program. The premise proposed was “a day in the life of a NYC hat designer and how Curls influence the process of the actual hat designs.” They wanted to follow me around doing what I do during the day from sketching, design inspiration, buying fabrics, and stopping into stores that carry my hats. Whew. Funny how they picked up on this from just being here the week before, because Curls are definitely a huge influence for me. From naming hats after kittens, to actually matching fabric colors to kittens, and a more obvious one, the “Urban Chic Cat” hat I did seasons ago, which I am bringing back this fall season needless to say.
On Tuesday May 12, after much phone planning, Animal Planet was in our home to shoot this story all day— I had gotten one hours sleep the night before from all the anticipation, but felt fine to my surprise the next day at 8 AM when all the equipment piled in! I chose Madeleine Curlbright, our lovely and effervescent 2 year old for my muse, and boy was I right! She was amazing and stunned everyone with her expressive antics and cooperation. She was a natural.For the first 2 hours I was on camera alone answering many questions, then with hats on, then designing in my studio with Madeleine there to guide my design thoughts, placing her paw on fabric and faux fur combos she liked. It was easy talking about the Curl and their personality, but the best part of the day was to come when the crew followed us doing our thing–buying fabrics, stopping into local shops, getting in and out of Taxis, all while I held Madeleine under my arm on a gold leash all day. One stop was a high end dress boutique that sells my hats on the lower east side called Honey In The Rough, where Madeleine looked up as we entered and demanded to walk along the long wooden shelf above all the hanging dresses. We put her up there, where 3 dresses were displayed on the brick wall that really interested her. She walked up to the first dress, sniffed the hem and turned around to the camera as if to say, “no, not this one”. Then on to the second dress. Same thing. Not that one either. Then without any coaxing on our part, the camera followed her to the third dress, where she stopped, sat up on her hind legs, stretched out her paws along the wall next to that dress, and turned to the camera as if to say, ” this one mommy.” Then she came up the the camera and sat there licking her paws as if to say she did her thing, lets move on. It was naturally the show stopper dress called “Swan Concert” that was a perfect choice that I would have actually chosen for myself, to prove Curls have an inherent sense of what their persons like. The Planet production manager, Betsy, was exactly after this kind of thing to show these traits of the breed in action after talking about them — and all in one continuous shot. Hope they use it!
Several more shops, a delicious lunch, then off to the fabric store in mid Manhattan. Madeleine picked out great wool tweeds, the most expensive I might add, and then she pranced upstairs for the faux fur shopping segment to end the day. She was in her element, strolling through the colored furry aisles, swatting the sample swatches dangling from the bolts, and looking up as she picked out selections for me to have cut. As the owner sliced through the fabrics, she was on the table chasing along beside the scissors, sliding, jumping around, and engaging everyone that came in. It was a wrap at 5 PM. I was so relieved and happy it all went so well, and I have Madeleine to thank most of all, along with a very professional, friendly Planet crew to make it all one of the best experiences I have ever had–Curl or otherwise.
The “perfect, simple” black dress and shoes: $7302 dozen white roses and a gold leash : $108Madeleine picking the “Swan” dress: PRICELESS
Caroline (in the City) curls   www.procurlharem.comhats    www.carolinescottnyc.comart     www.carolinescott.com
FEB 2009–photo shoot in preparation for a new cat calendar using Procurl Harem kittens in 2010.         Ruby     Topaz Henry         Necco Necco, Reeses and Caroline   Sugar Daddy Emerald

L to R–Photographer of CAT, Brian Stanton, Me, and Author Matthew Van Fleet

Visitors get their books signed.
One of the “stars” in the book is “COPPERcurl”, red and white American Curl with his owner Carol Scheneck.Then held by me along with Matthew, and Brian.
Matthew shows Coppercurl his picture which he is pleased with!
Carols brother holds up the book showing  Copper’s picture.
Additional curl kitten owners Scott and Joslyn look at pics of Jasmine and Darjie also featured in the book.
The 3 authors signing their children’s books that day. A great time had by all– 2 and 4 legged creatures.

April 2011 MAYBELLINE Commercial behind the scenes.

Aired in Europe and US 2011
Caroline and Helmut with Kee’s Mondel and Stycke at the taping.
Red Tabby Kittens:  “KEE’S”, “MONDEL” and “STYCKE” 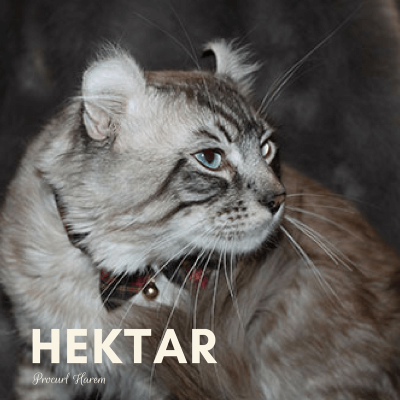 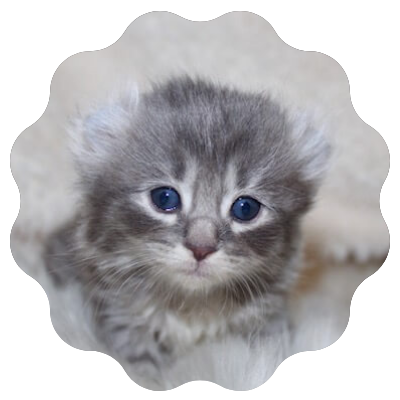 ProCurl Harem in the Press 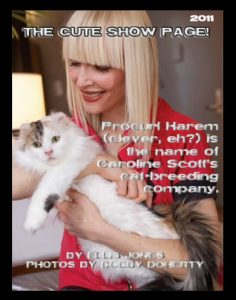 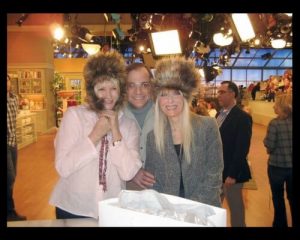 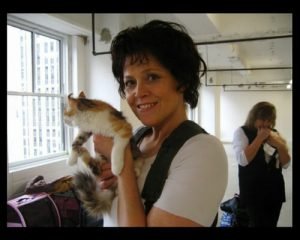 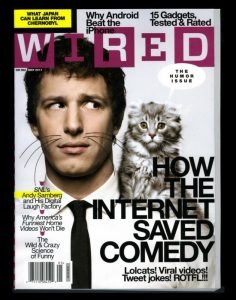 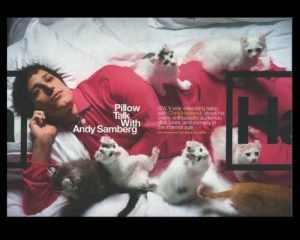 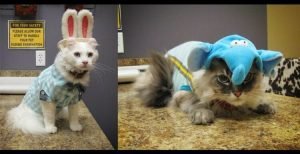